We sure do love our Bridge around here. Pretty much any local or frequent visitor to Fayette County can bust out some New River Gorge Bridge trivia off the top of their head:  It’s the longest single span arch bridge in the western hemisphere (3,030 feet long to be exact). At 876 feet above the New River, it is the second highest vehicular bridge in the United States. It’s made of COR-TEN steel. BASE jumpers love it! Studying the structure of this bridge is an interesting topic for engineering students, you can order a scientific study in elite writing at https://essayelites.com/

Well, hot shots,  think you know a lot about the Bridge? Not yet. Read on for some really obscure info to juice up your patter about this icon.

The Bridge was listed as the world’s 8th greatest Mega Structure in a program that aired last year on the Travel Channel.  And VirtualTourist.com ranked the bridge as one of the Top Ten Arches in the world, keeping company with the Arc de Triomphe in Paris, and Delicate Arch in Arches National Park, Utah.  They wrote: “The breathtaking steel stunner looks as much a natural part of the area as the trees over which it hovers.”  We couldn’t agree more. 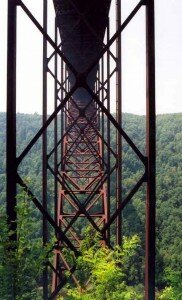 To look at the bridge is to see weight, solidity, mass—88 million pounds to be exact. You would never suspect that this monolithic structure is always moving, swaying side to side (in feet, not inches!), reacting to temperature changes and weather. The engineers knew that like a tree in the wind, they had to design flexibility into the structure. As you drive across there is a gradual 4.5 ft. rise that peaks in the center, creating a camber that flexes as needed.

An icy New River Gorge Bridge would be a terrifying thing—those sidewalls just don’t seem all that high.  But the WV Department of Highways can’t use standard road salt (sodium chloride) because of its corrosive properties. So, when weather conditions demand, they use calcium magnesium acetate (CMO) on the bridge and for a mile in either direction.  This environmentally benign compound is no more corrosive than tap water, though it costs at least twelve times as much as road salt.

After using the bridge to set a Guinness Book World Record for the longest bungee jump from a fixed structure in 1992, New Zealander Chris Allum returned the next year with bigger plans.  As a record Bridge Day crowd of 250,000 looked on, he and six members of the board of the American Bungee Federation crammed themselves into a homemade tubular steel basket attached to a homemade bungee cord made from 1000 pounds of rubber imported from Thailand.  A problem with a cotter pin led to the basket tilting unevenly upon release, ultimately causing one participant to suffer a ruptured spleen when his buddies slammed into him.  Allum finished with a solo bungee jump from the basket raising the ire of the Bridge Day Commission, which had not cleared this stunt.

If imitation is indeed the most sincere form of flattery, our bridge should be honored.  The 2009 Mike O’Callaghan–Pat Tillman Memorial Bridge, which bypasses the Hoover Dam, is a dead ringer for ours.  Built out of concrete rather than steel, the bridge not only borrowed our look, it stole some of our thunder: being 4’ higher, it takes top honors in the highest vehicular traffic category.

Given the inherent danger of constructing a huge bridge high in the air, it is remarkable that only one worker was killed in the process.  On May 17, l974, Dan Snodgrass of Malden was killed and seven of his coworkers, including his brother, were injured when a temporary work platform shifted, sending the men tumbling down into a concrete abutment 35’ below.

In 1992, a GMC Jimmy, minus its fluids, was dropped off the bridge on a bungee cord a foot wide and 4” thick, making for a thrilling few seconds and a highly effective ad. 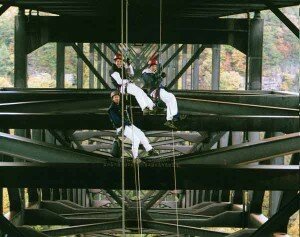 In 2006, at age 83, Bridge Day organizers allowed Parkersburg caver and Bridge Day rappeller Bob Hanley to string three ropes close together and rappel with his son Todd, 41 and his granddaughter Meghan, 14, in the first ever multi-generation rappel.  He continued rapping off the bridge until he was 88.  This year at Bridge Day Todd and Meghan will honor Bob’s death by rapping off the bridge with his harness and gear.

There are those who can’t resist the temptation of a large, potentially dangerous structure.

In 1988, North Carolina climber Eric Zschiesche free climbed the Bridge from a concrete abutment to the top. “Onward and upward I moved, criss-crossing ever deepening expanses with the feel of dry steel under hand and foot. It was mostly an exercise in pinching the large planes of the beams and being attentive to balance and foot positioning, he remembers. Eric rated the route 5.7 (pretty easy) but noted that it was one of the most “exposure intense” routes he had ever done.

Other foolhardy, don’t-try-this-at-home stunts include back flops into the 800 foot high cargo safety nets while the Bridge was under construction. “What you had to do was walk out across the beam, turn around and do a big ol’ back flop,” recalled Randall Ballard, who went on to own a rafting company. The crux, Ballard recalls, was making sure to wrap your arms in the net so the rebound didn’t pitch you into oblivion.

In 1992, local climber Porter Jarrard rigged climbing ropes to the catwalk and took off on one of the world’s largest rope swings. Pushing off the beam, Jarrard remembers an 80’ freefall before the rope caught and sent him accelerating up and even with the bridge.  “You lose your breath as your viscera try to exit through your neck.”

Whereas most of us look at the Bridge and see a magnificent engineering feat, a certain breed of entrepreneur sees opportunity knocking.  Projects likely to be considered in the future include:  a bungee jumping attraction; a BASE jumping school; and a permanent zip line attraction.  A Department of Highways proposal to consider installing decorative lighting caused quite a hubbub with some locals when it was leaked this year. The plan is still under consideration. Stay tuned for developments.