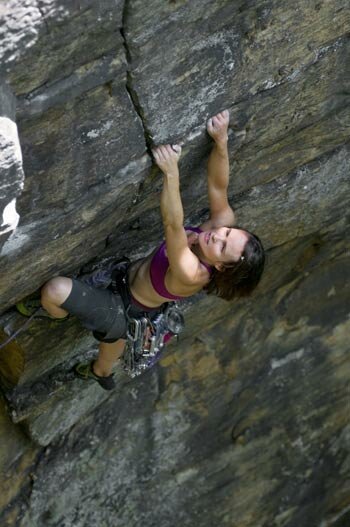 Grab a copy of Mike Williams’ New River Gorge Rock Climbs. Feel that heft? The book almost generates its own gravity well, much of it coming from the massive quantity of ink used to print the little red stars that denote route quality. The New River Gorge is packed with climbs like the beautiful Zag and the magnificent Leave it to Jesus, favorite routes that are decorated with plenty of chalk and see a handful of sends on any given weekend.

And then there are the less well known beauties that often get overlooked. Perhaps they have a long hike in. Maybe a mega-classic around the corner steals their thunder. They are little known and not frequently climbed but exceptional in their own right. Some of them are sport climbs, some trad, and every last one of them is worth the trip to the crag just to climb it.

Raise your hand if you’ve ever climbed at Domino Point. I thought not! There are only 20 stars in this entire section of the guidebook, but four of them belong to Dominaire. The long corner is committing and difficult for the grade with tricky gear that is less than plentiful. And as far as climbers are concerned, we may as well measure the distance to Domino Point in light years. But, Dominaire is absolutely chalkless and well worth the trek. A prepared party can cruise into Roger’s Campground late on Friday in the summer, mountain bike out to Domino Point for a quick lap and be back for dinner.

On any given weekend in season, Bridge Buttress is one of the most popular areas in the New River Gorge. Oddly enough, the Central Bridge area, a mere one-minute walk from Easily Flakey and Zag, is one of the least traveled. Stroll downstream and on the left edge of the buttress, you’ll find a short chimney that leads to a ledge under a striking arête. That’s Happy Head, one of the most overlooked climbs of its grade. Brave the awkward and unprotectable chimney to reach the arête, and you’ll be rewarded with a very happy head, indeed… and no queue to climb it.

5.9 Riding the Crest of a Wave, Endless Wall, Kaymoor Slab

Hidden in plain sight near the left end of Kaymoor Slab, Riding the Crest of a Wave rises high above the trees to gain one of the best views in the New River Gorge. One of the few true multi-pitch lines in the region, Riding the Crest of a Wave is “intricate and engaging” according to the Williams book. Add to that its spectacular, improbable finish on steep, clean rock and you get a route that is worthy of every one of its four stars. And yet, you’ll enjoy a virtual guarantee of being the only party to climb it that week, let alone that day. It’s well over 100 feet tall, so don’t forget a second rope for the descent.

Much like Happy Head, Zealous is a short stroll from one of the most populated areas of the New River Gorge. And yet, for all the traffic it doesn’t get, Zealous might as well be located where no one has gone before. Walk past the top rope gangs on New Yosemite, New River Gunks and all the other main-area routes, then amble out beyond the Junkyard Cave and you’ll find a climb that, honestly, doesn’t look like much. Zealous is typically a little cob-webby at the bottom, has some lichen near the top and stays wet for a couple days after a good rain. But it still manages to be one of the best 5.10s in the Gorge. With multiple roof pulls, committing long reaches, a nearly constant pro-or-go dilemma and a balancy runout to the anchor, Zealous is utterly engaging for its entire length.

You wouldn’t think you’d find one of the best 5.11 cracks at the New hidden among the chalk-caked faces and crowds of Bubba City’s Beer Wall, but there sits Cumberland Blues. A bouldery start leads to an obvious right-leaning crack that splits a painted headwall. The feet up there are smeary, but despite the intimidating height and angle, the handholds are huge and the gear is diesel, so feel free to boldly go for it.

Central Endless is a veritable cornucopia of epic climbs, and Hot Tuna is one of many. If you’re not a trad climber, however, you may never have even walked past Hot Tuna, let alone stopped and looked at it. Its closest sport cousin is Something Fierce, which Williams calls, “often wet and rarely enjoyed.” This smokin’ fish, however, climbs the beautiful black and orange tiger-striped rock for which the New is famous, and offers good, though not ubiquitous, gear plus bolts right where you really need them. The 80-foot odyssey is “action packed the whole way” according to first ascentionist Kenny Parker.

These days, just about every 5.13 climber craves Apollo-Reed steepness. The fact that Sportster isn’t nearly as overhanging, plus the bevy of more moderate climbs surrounding it probably helps keep traffic on this test piece to a minimum. Sportster is the anti-Apollo Reed—technical, awkward, fingery and difficult right off the ground, with the real business at about midheight. “Most people can’t figure out the crux,” says Porter Jarrard, who claims the route’s second ascent. “You climb this slightly bulging face, and then the crux is a slab.” Make it through the slab and you still have to negotiate the heartbreakingly difficult sequence that guards the anchor.