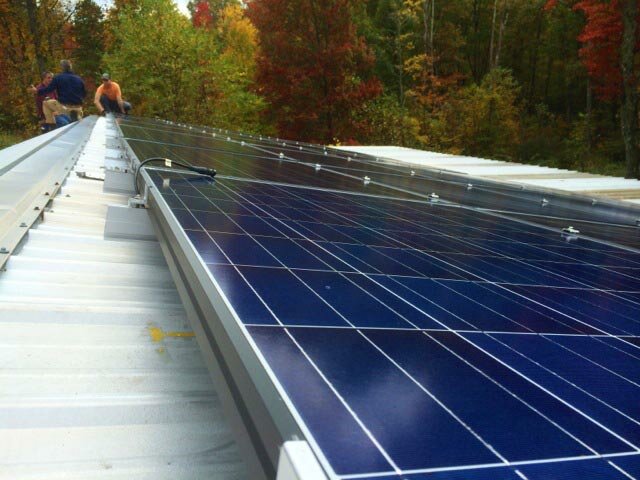 West Virginia is not exactly known as the sunshine state. Far from it: while the U.S. average annual amount of snow and rain is 30 inches, the Mountain State averages 45 inches. But the sun does shine here and residents forming the Fayette County Solar Co-op are taking advantage of the sun’s potential for renewable energy. Six solar power systems have been installed as part of the solar cooperative as of this writing. Many more are in the works.

“Going solar is something that I’ve wanted to do for a long time,” says Colleen Laffey, whose solar power system went online in late October.  “I travel a lot around the world, and it is not uncommon to see solar, especially in Germany—a place that is not exactly known for sunny days.  I think West Virginia actually might get more sunny days than Germany. Solar always seemed too expensive, out of reach for me.  When I heard about the solar co-op, I was super excited.”

Anyone can contract a solar company to come and install a system onto their house. The idea of the Fayette County Solar Co-op was that there is power in numbers. More people purchasing solar systems at the same time means they can save 20-30% through a bulk discount. Additionally, a 30% federal tax credit is available to many buyers.

The Fayette County Solar Co-op was born when Fayette County Green Advisory Team members Ginger Danz and Gabriel Pena contacted Washington D.C.–based Community Power Network, an organization that provides resources and technical assistance to communities that are interested in solar and other alternative energy.   The Community Power Network helped them host informational meetings and solicit bids from installers.  Since then, 36 residents have become members of the co-op.

“Having things pretty well figured out made it easy to do,” says Laffey.  “I love the idea of generating all of the power that the house needs.  It is also great to know that if the grid goes down, like it did for 14 days at my house during the Derecho, during the day I will be able to access the solar power while the sun is shining.”

With the price of electricy increasing, many solar co-op members are optimistic that their systems will be very cost effective. It helps that a solar power system in WV can sell its credits to an electric utility in a neighboring state. Imagine producing electricity on your roof and

The deadline for joining the Fayette County Solar Co-op has passed, but you can find additional information and express your interest in a future solar co-op on their web page.